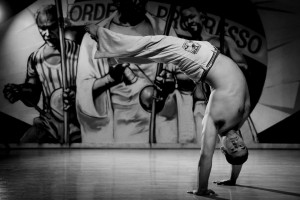 Alex Rodriguez (Contra Mestre Metido) began capoeira at the early age of eleven with Mestre Rodrigo Zerlotti. Since beginning his training, Contra Mestre Metido has dedicated himself to learning the art of capoeira and teaching it with as much accuracy on technique and tradition possible. As a part of his on going education in capoeira , he has also taken countless workshops with great Mestres of capoeira like:

His time is now devoted to the growth of capoeira and its cultural diversity in the Austin, Tx.

In 2001 he took his first trip to Brazil to train under Mestre Wilton Peiria (Mestre Rodrigo’s Mestre) and Mestre Mauro Gomes(Grupo Capoeira Berimbau) as well as several other mestres in the São Paulo and Campinas area of Brazil. Upon returning from Brazil, Contra Mestre Metido began to teach alongside his good friend Contra Mestre Pena (Corey Goodman) at the level of instructor and is still continually looking for methods to learn and to grow in this complex art form.

Contra Mestre Metido spent a year training with Mestre Fran (Capoeira Maculele), in order to progress his Comtemporary style of Capoeira and continues to train all styles of Capoeira( Angola, Regional, Contemporânea).

In March 2010 he received his title of Contra Mestre under Mestre Rodrigo’s tutelage. He currently is in charge of Capoeira Evolução Austin and is devoting his time to  traveling, teaching workshops, and performing.