Our goal in the Austin area is to teach the traditions of Capoeira Regional, to help establish a good source for capoeira knowledge and allow the art to grow. We want to make an impact in our community by providing the best capoeira techniques, workshops, and shows while maintaining all the cultural aspects of this Afro-Brazilian martial art. You can take advantage of songs and all resources that are available to through this site to improve your capoeira skills and knowledge.

Mestre Bentinho
Mestre Bentinho was the of Mestre Bimba, who later went on to become the founder of capoeira regional. However very little is known of Mestre Bentinho’s life. It has been said he was born in Africa and worked as a seaman in a shipping company in Bahia de Todos os Santos (Bay of All Saints). Even the dates of his birth and death are unrecorded.

Mestre Bimba is one of the most important figures in capoeira history. He received training in traditional capoeira from Mestre Bentinho and also studied the African martial art batuque with his father. This latter form included grappling and throwing moves. In the 1930’s, Mestre Bimba sought to create a more dynamic and effective technique, which he named Luta Regional da Bahia, usually referred to simply as Regional. Mestre Bimba also adapted a standardized system for teaching capoeira in an academy setting, which has since become the norm in both angola 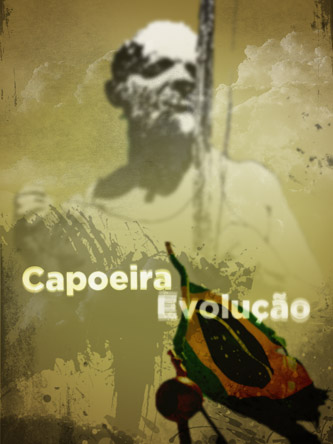 and regional styles. His work served to preserve and popularize the art throughout Brazil and the world and helped to save it from extinction. Mestre Bimba died of a stroke in 1975.

Reinaldo Ramos Suassuna
Mestre Suassuna was born in Bahia and began training capoeira as an adolescent. After achieving the rank of Mestre, he moved to São Paulo in the south of Brazil. There, in the 1960s, he formed his influential group Cordão de Ouro. Mestre Suassuna is one of the most famous of contemporary capoeira mestres. He has traveled extensively throughout Brazil, the United States, Europe and beyond, participating in events, giving exhibitions and workshops. Mestre Suassuna continues to make his home and lead his group in São Paulo.

Jurema
Mestre Jurema (Ezion Medeiros de Castro) was a student of Mestre Suassuna. He studied in São Paulo for several years and after receiving his Mestre title he moved to Campinas where he opened the “Academia de Capoeira Senhor do Bonfim” with Wilton Pereira.

Wilton Pereira
Mestre “Sapo” Wilton trained with Mestre Suassuna in São Paulo. After he moved to Campinas, Mestre Wilton studied under the supervision of Mestre Jurema. He was awarded the title of Mestre in 1984 during a batizado in Campinas, São Paulo.

Mestre Rodrigo is originally from the town of Campinas in São Paulo state. He began training capoeira at the age of 13. Under Mestre Wilton, he achieved the cordão troncado of contra-mestre at the age of 20 and began teaching in various locations in the city of São Paulo. In November 1990 he emigrated to Austin, Texas and began teaching in the fall of 1991. During a return trip to Brazil in 1996, he was awarded the white corda of Mestre. 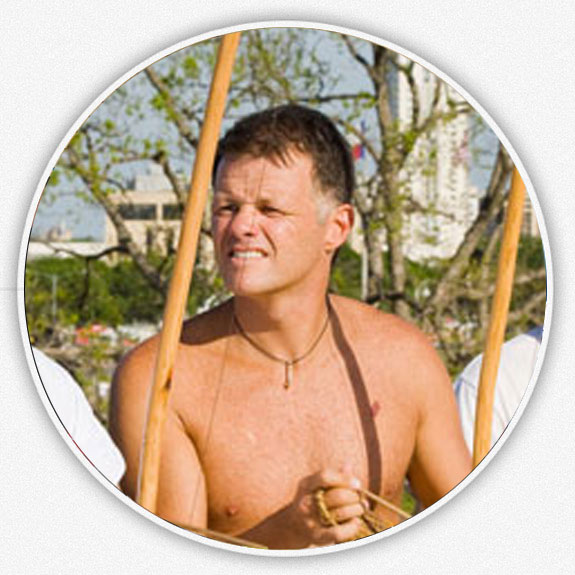 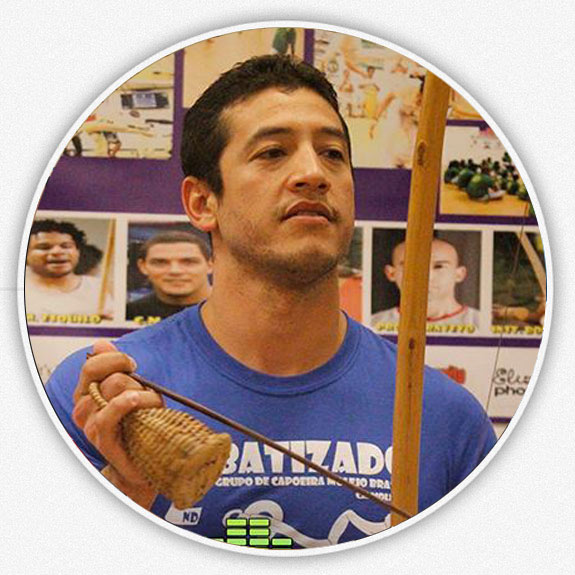 His time is now devoted to the growth of capoeira and its cultural diversity in Austin, Tx.
In 2001 he took his first trip to Brazil to train under Mestre Wilton Peiria (Mestre Rodrigo’s Mestre) and Mestre Mauro Gomes (Grupo Capoeira Berimbau) as well as several other mestres in the São Paulo and Campinas area of Brazil. Upon returning from Brazil, Contra Mestre Metido began to teach alongside his good friend Contra Mestre Pena (Corey Goodman) at the level of instructor and is still continually looking for methods to learn and to grow in this complex art form.
After Mestre Rodrigo’s return to Brazil in 2005, Metido spent a year training with Mestre Fran (Capoeira Maculele) in order to progress his Contemporary style of Capoeira and continues to train all styles of Capoeira (Angola, Regional, Contemporânea). Since then he has devoted his time and effort to keeping the Capoeira Evolução group growing in Austin and has taken leadership of the group.
In March 2010 he received his title of Contra Mestre under Mestre Rodrigo’s tutelage. He is currently in charge of Capoeira Evolução Austin and devotes his time to traveling, teaching workshops, and performing.

Contra Mestre Pena began to practice with Mestre Rodrigo at the age of 12 and has been training for the last 15 years in technique, music, history and the roots of capoeira culture.
In 2001 Pena took his first trip to Brazil, where he trained under Mestre Wilton Pereira (Mestre Rodrigo’s mestre) and Mestre Mauro Gomez (Capoeira Berimbau) as well as various other mestres in the São Paulo and Campinas areas of Brazil. The following year Pena began to teach as an instructor and in 2004 he made another trip to Brazil for 4 months of travel, training, and learning Portuguese. He trained with several mestres along the way. Upon his return to the U.S. he was invited to do a 2-week workshop in Michigan Technological University, where he taught capoeira music, culture and history.
When he returned to Austin he began to teach capoeira full-time for the next 3 years and went to college as a film student. In 2007 Mestre Rodrigo graduated Pena to the level of Professor and since then he has been in countless events, workshops and batizados all over the U.S. In November of 2007 he moved to Florianopolis, Brazil where he continued to train capoeira. In March 2010 he received his title of Contra Mestre under Mestre Rodrigo’s tutelage. He returned to the U.S. in 2013 and settled in Fort Lauderdale, Florida. 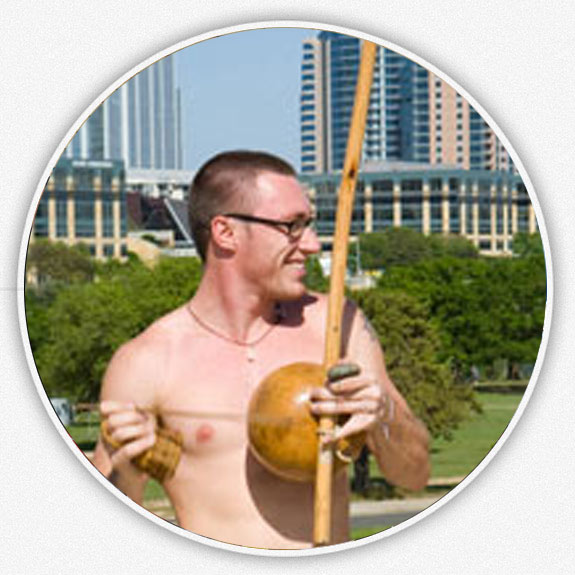 Instrutor Negro has dedicated his life to being an athlete. His first sport was Track & Field, which he started as a child, and he discovered baseball soon after. He played baseball for 12 years, eventually becoming a professional center fielder. From there he went into intense training for triathlons. In the spring of 2005, Negro first encountered capoeira. From the moment he stepped into his first Ginga, he knew he had found his true athletic and professional calling. After studying capoeira for one semester at a satellite school in Corpus Christi, Negro relocated to Austin to train directly with Mestre Rodrigo and Capoeira Evolução. Besides training with Mestre Rodrigo, Negro has trained extensively with Contra Mestre Metido and Contra Mestre Pena. He has also trained with various Mestres, Contra Mestres, Professores, and Instutores across the USA, Puerto Rico, and Brasil. In 2014, Negro earned the rank of Instrutor, the first professional cord in the sport. Also in 2014, he won All-Around Tournament Champion of the ICAPF Texas.
Negro is highly active in Capoeira Evolução, teaching adult, children’s and community classes. He plans to expand the Capoeira Evolução flag by starting a studio of his own in the Austin area in the near future. Negro continues to refine his teaching and philosophy as he grows in his own knowledge of and dedication to the practice of capoeira. He currently teaches at a satellite location in West Austin, follow the link below: Oakhill Capoeira 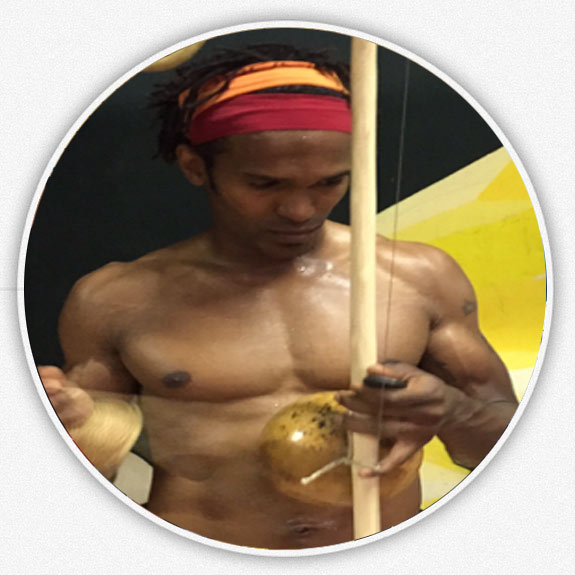 Graduada Pimenta is originally from Mexico. She began training capoeira in 2005 and brings a bright energy to the group. She began training under Mestre Rodrigo and has continued her training under Contra Mestre Metido since Mestre’s return to Brazil in 2006. Pimenta has dedicated a large portion of her life to Capoeira and continues to train consistently to improve in this art form that has changed her life. Pimenta has played an important role in the success of the children’s program at Capoeira Evolucao and has taught in the group’s community programs. To continue her growth Pimenta has attended workshops by Mestre Rodrigo, Mestre Virgulino, Mestre Demetrius, Profesor Esquilo, Instrutor Gaviao, Mestre Jelon, Mestre Canguru, Mestre Fran, Profesor Borracha, Profesora Venus and many other talented capoeiristas from around the globe. She is proficient in maculele, acrobatics and samba, and can sing many capoeira songs with her soulful and energizing voice. Pimenta’s goal is to help with the progress of Capoeira Evolucao all while improving on her abilities as a capoeirista and continuing to be a role model for those that follow in her footsteps. 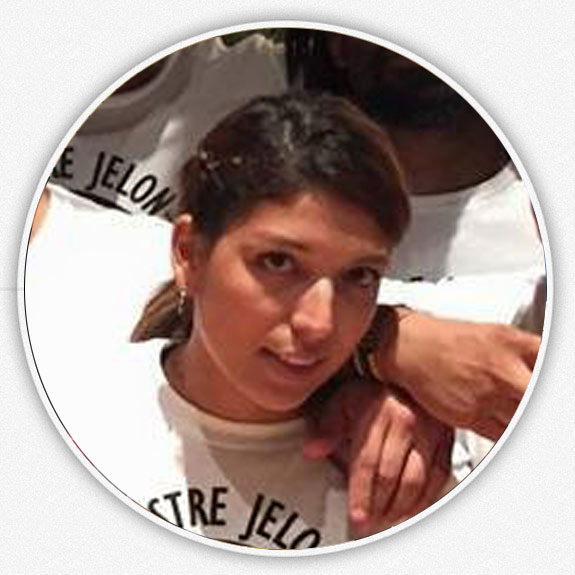 Graduado Espoleta first started training capoeira in 2003 when he was a freshman at St. Edward’s University. He had always been an athlete, playing team sports including soccer and collegiate rugby. Espoleta started training under Mestre Rodrigo and continued under Contra Mestre Metido. Espoleta earned the rank of Graduado in 2013. Espoleta currently lives in Houston and makes frequent trips to Austin to support the group and continue his growth as a capoeirista.

Graduado Cicatriz was always fascinated by the art of Capoeira. Coming from a breakdancing background, he knew very well that the movements of capoeira require a high level of athleticism. Cicatriz began his training with Mestre Rodrigo Zerlotti in 2000 and it immediately became obvious that capoeira was always going to be a part of his life. Through the years Cicatriz trained with Mestre Rodrigo and the high cordas learning as many aspects of capoeira as possible. He has assisted with teaching beginner, advanced and children’s classes. In 2013, Cicatriz achieved the title of Graduado. He continues to train under Contra Mestre Metido at Capoeira Evolução, where he assists in teaching classes and is further developing his craft. 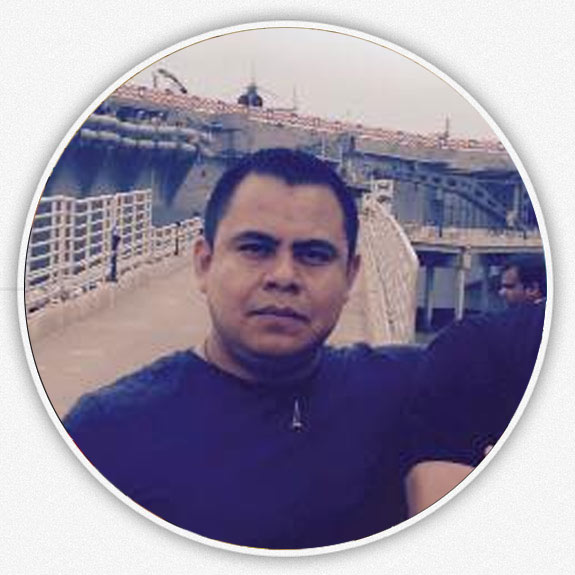 Graduado Castor started training at Capoeira Evolucao in 2006, under Mestre Rodrigo. A year later, Castor’s son joined the group as an enthusiastic seven-year old. In 2014, Castor earned the title of Graduado, and also took 2nd Place in the ICAP Capoeira Competition. Today, both father and son continue to train under the Capoeira Evolucao flag with Contra Mestre Metido. Castor teaches and travels regularly, and continues to hone his understanding of capoeira not only as a martial art, but as a philosophy.