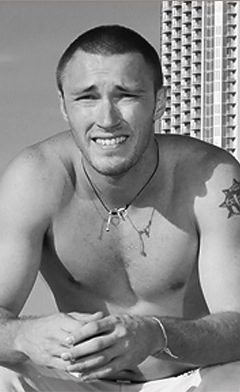 Contra Mestre Pena began to practice with Mestre Rodrigo at the age of 12 and has been training for the last 15 years in technique, music, history and the roots of capoeira culture.

In 2001 Pena took his first trip to Brazil, where he trained under Mestre Wilton Pereira (Mestre Rodrigo’s mestre) and Mestre Mauro Gomez (Capoeira Berimbau) as well as various other mestres in the São Paulo and Campinas areas of Brazil. The following year Pena began to teach as an instructor and in 2004 he made another trip to Brazil for 4 months of travel, training, and learning Portuguese. He trained with several mestres along the way. Upon his return to the U.S. he was invited to do a 2-week workshop in Michigan Technological University, where he taught capoeira music, culture and history.

When he returned to Austin he began to teach capoeira full-time for the next 3 years and went to college as a film student. In 2007 Mestre Rodrigo graduated Pena to the level of Professor and since then he has been in countless events, workshops, batizados all over the U.S. and in November of 2007 he moved to Florianopolis, Brazil where he continues to learn, train, and practice the art of capoeira. In March 2010 he received his title of Contra Mestre under Mestre Rodrigo’s tutelage.