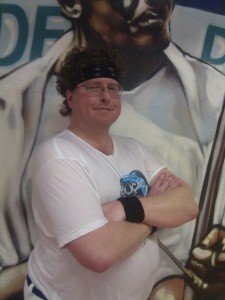 Graduado Marcha Lenta began his training in 1994 capoeira in Albuquerque, New Mexico when that school was under the supervision of Mestre Accordeon. In 1997 He moved to Austin, Texas and began training with Mestre Rodrigo Zerlotti (Capoeira Evolução). After returning from a yearlong medical hiatus Marcha Lenta began training with then Professor Metido. He continues to train with Contra Mestre Metido to this day. When Contra Mestre Pena when he is visiting from Brasil and Graduado Caveira is visiting from Miami Graduado Marcha Lenta trains with them. He has also attended workshops with Mestre Accordeon, Mestre Rã, Mestre Fran, Mestre Jurandir, Mestre Gato, Mestre Virgulino, Mestre Wilton and others. During Graduado Marcha Lenta’s career, he has traveled Central America and Japan, and trained capoeira these regions. He studied capoeira in Oizumi-machi (Portuguese only), Kyoto, and Tokyo (Japanese only), Japan. He also taught capoeira with a capoeirista from Denmark in Santa Rosa de Copán, Honduras. In 1994 at the age of 30 Marcha Lenta (then Barauna) received his initial batizado from now Mestre Gallo. He received the title of Graduado Marcha Lenta in 2011. He is still active in capoeira today.